For Men Who Want Faster, More Noticeable Results From Their Kettlebell Training...

How John Increased His Strength By Almost 25% And Lost 4.5 Pounds
(2 Kilos) In Only 3 Weeks Using
ONE Kettlebell Exercise
Just 90 Minutes A Week...
Without Dieting.

And yes, I know that sounds "too good to be true" which is why I want to show you proof.

I'm not sure you remember when kettlebells first hit the market back around 2000/2001...

One of their selling points was that you would -

"Watch in amazement as high-rep kettlebells let you hack the fat off your meat -- without the dishonor of aerobics and dieting..."

And that promise was through using high-rep Snatches and Clean & Jerks.

Why is it that so many people have failed to see the results they're looking for?

Swings And Get Ups

As someone who's been hoisting kettlebells since January of 2002 both with myself and with my clients, these 2 exercises are a double-edged sword.

Unlike the Russians, who apparently had lots of Physical Education interspersed throughout their school days, their American counterparts became stiff as boards and lost the use of their hips and shoulders.

And thus, the Swing and the Get Up became the substitute for the Snatch and the Clean & Jerk.

So the Swing and the Get Up, along with a whole host of weird mobility drills became the foundation for the modern kettlebell movement to the point where these two exercises have achieved [in my mind] an unwarranted near cult-like status.

Malcolm Gladwell, in his book, Outliers, wrote about the "10,000 Hour Rule," which is the necessity of practicing something for at least 10,000 hours to become proficient at it.

In the science of Motor Learning, it is also estimated that it takes approximately 10,000 reps of practicing a certain movement for it to become "autonomous" -

Near effortless and thoughtless.

While I agree we should all probably perform 10,000 Swings...

I also firmly believe that once we do, we should move on to more challenging and more powerful exercises if we can...

Exercises like the Snatch and better yet, the Clean & Press/Push Press/Jerk produce a greater demand on the body for change, so they produce better all-round results.

In my experience, Swings are like school lunch "Mystery Meat" -

You know, the "meat loaf" served at school lunches that tasted like meat but you were never too sure...

Sure, it tasted fine, and filled you up, especially when paired with mashed potatoes and a couple of cartons of milk...

You could count on it, but if you had options, it wouldn't be your first choice...

Swings and Get Ups are like a Wendy's Double Cheeseburger -

It looks great on the menu, smells good on your tray or in the bag, but when you open up the wrapper, it doesn't look exactly the same...

And although it certainly is tasty, it doesn't really satisfy.

The [Double] Clean and Press on the other hand is like -

A Bone In Tomahawk Ribeye

If you've never had one of these beauties, it's hard to describe what you're missing.

The meat, especially when cooked rare, is succulent and juicy, bubbling with flavor...

One of the most satisfying (and expensive!) steaks I've ever had.

The kettlebell Clean & Press - especially when using a PAIR of kettlebells is like that.

You feel your whole body practically swelling with strength -

And when programmed correctly, even your heart and lungs.

And unsurprisingly, it even peels off body fat -

After almost 19 years of kettlebell training, in my estimation it is the near-perfect exercise.

He's been one of my customers for that long, having purchased several of my products and beta-tested others, including Kettlebell STRONG!, Kettlebell RMF, and Kettlebell EXPRESS! (twice).

He agrees with me about the Clean & Press.

Here's a recent email exchange he and I had: 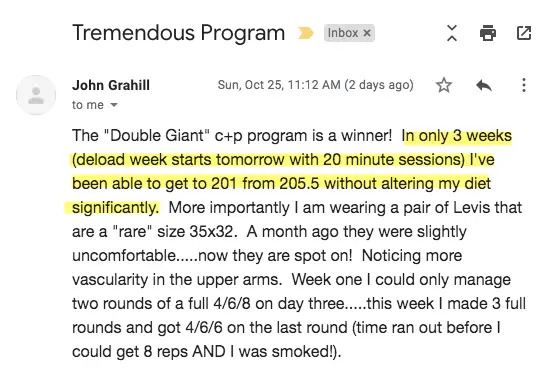 He was doing the "Double Giant" - which is the doubles version of a single kettlebell program called, "The Giant."

Here's what else John said -

In other words, John saw a 24% increase in his strength-endurance levels in only 4 weeks!

Oh, and I failed to mention -

John is a "high mileage" individual who's in his mid-50's!

This is more like that original promise of kettlebell training, wouldn't you agree?

"Watch in amazement as high-rep kettlebells let you hack the fat off your meat -- without the dishonor of aerobics and dieting..."

Quite honestly though, John didn't use reps that were that high.

He used "moderate" reps and my specialized programming.

Now, for the first time ever, you too can get your hands on -

You may think THE GIANT is one program. 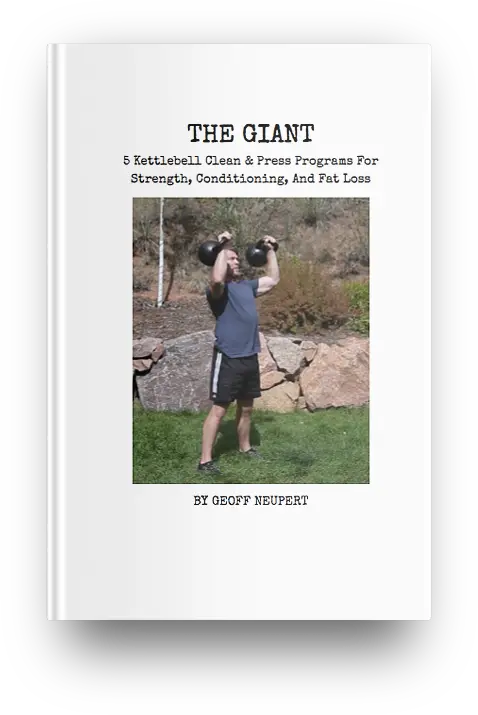 And the best part is -

You can run all these programs back-to-back for 20 weeks of high quality programming!

All You Need Is ONE Kettlebell

And it doesn't even have to be HEAVY.

And now, suddenly, you have 16 weeks of programming at your fingertips allowing you to transform your body with the kettlebell Clean & Press in only 90 minutes per week.

Accelerate your results and grab A PAIR of kettlebells - they don't even have to match - you're simply limited by the "heavier" one.

How much does THE GIANT cost?

That depends on whether you get the Basic version or The PREMIUM version.

Here's what's included with each: 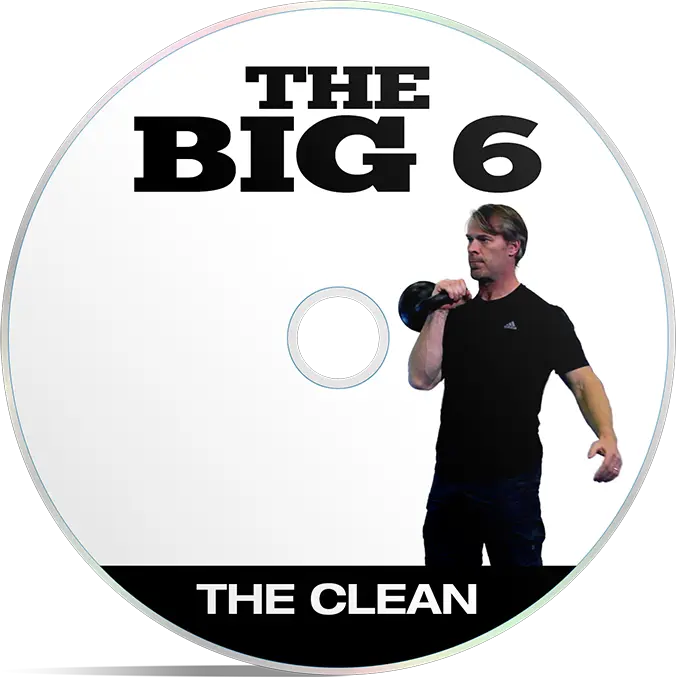 BONUS #2: THE BIG 6 - How To Kettlebell Press Videos 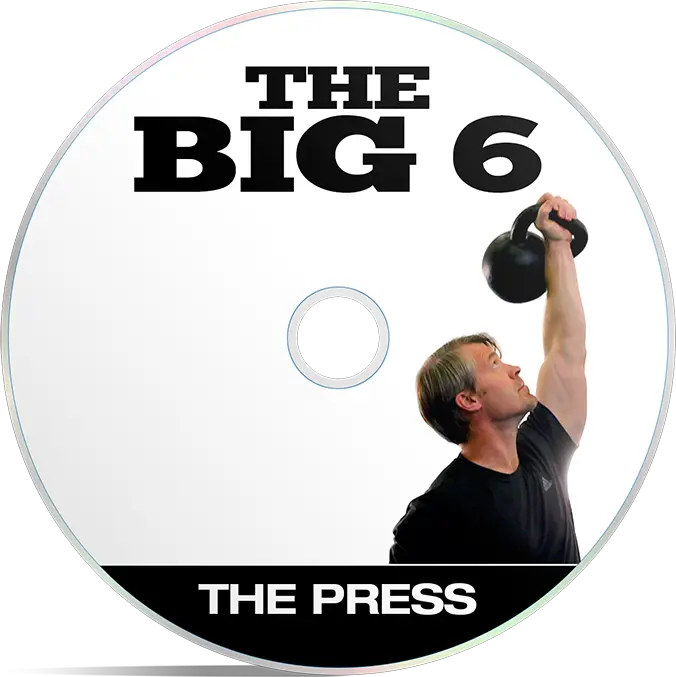 BONUS #3: THE BIG 6 - How To Swing… Turkish Get Up… Goblet Squat… and Snatch Videos 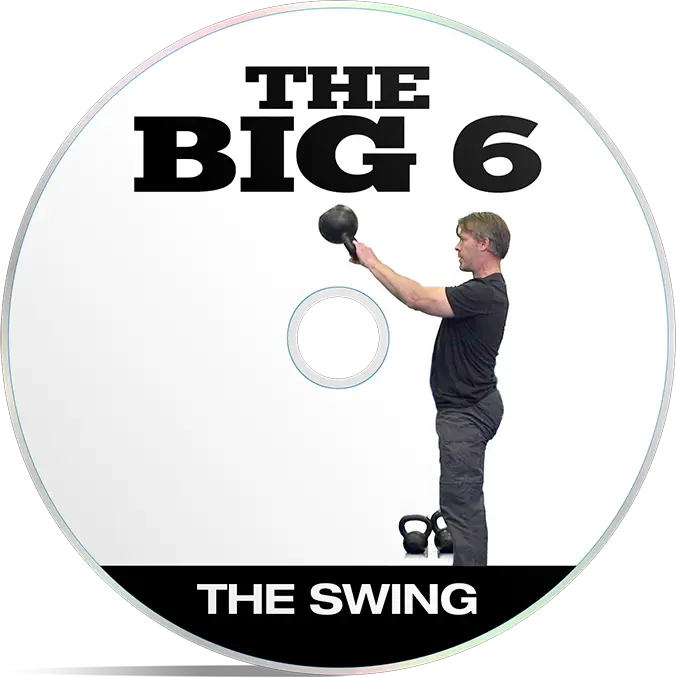 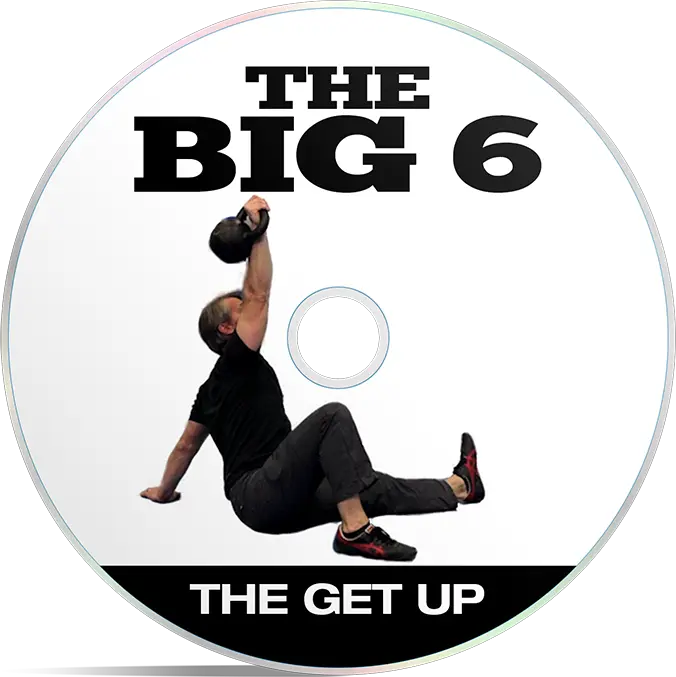 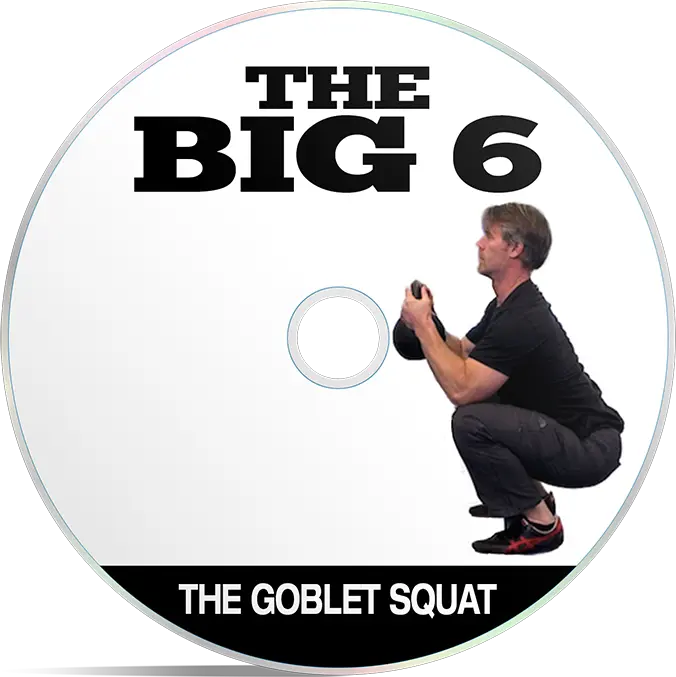 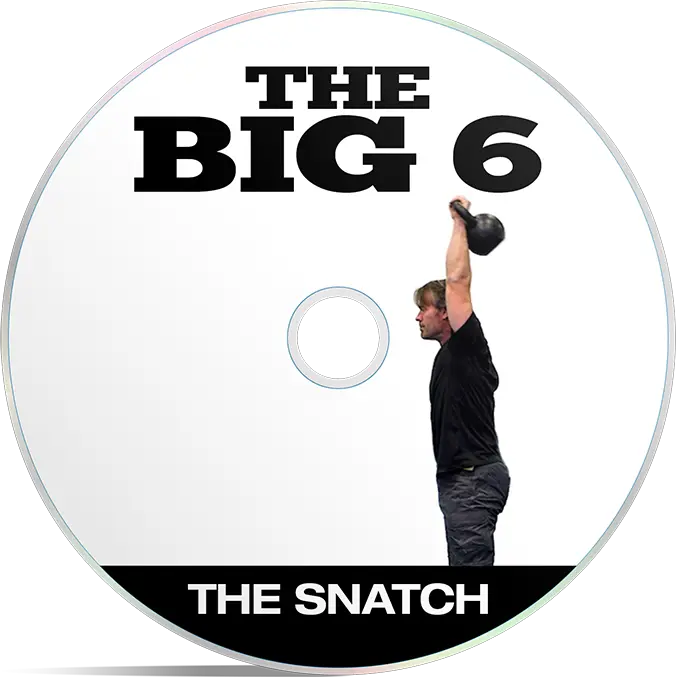 Get It All Right Now

Less than a dinner for four at a mediocre restaurant and a lot easier on the ol' digestive system, if you know what I mean.

And in case you're wondering...

... Seeing amazing results from THE GIANT.

Here's what other guys just like you and me have accomplished... 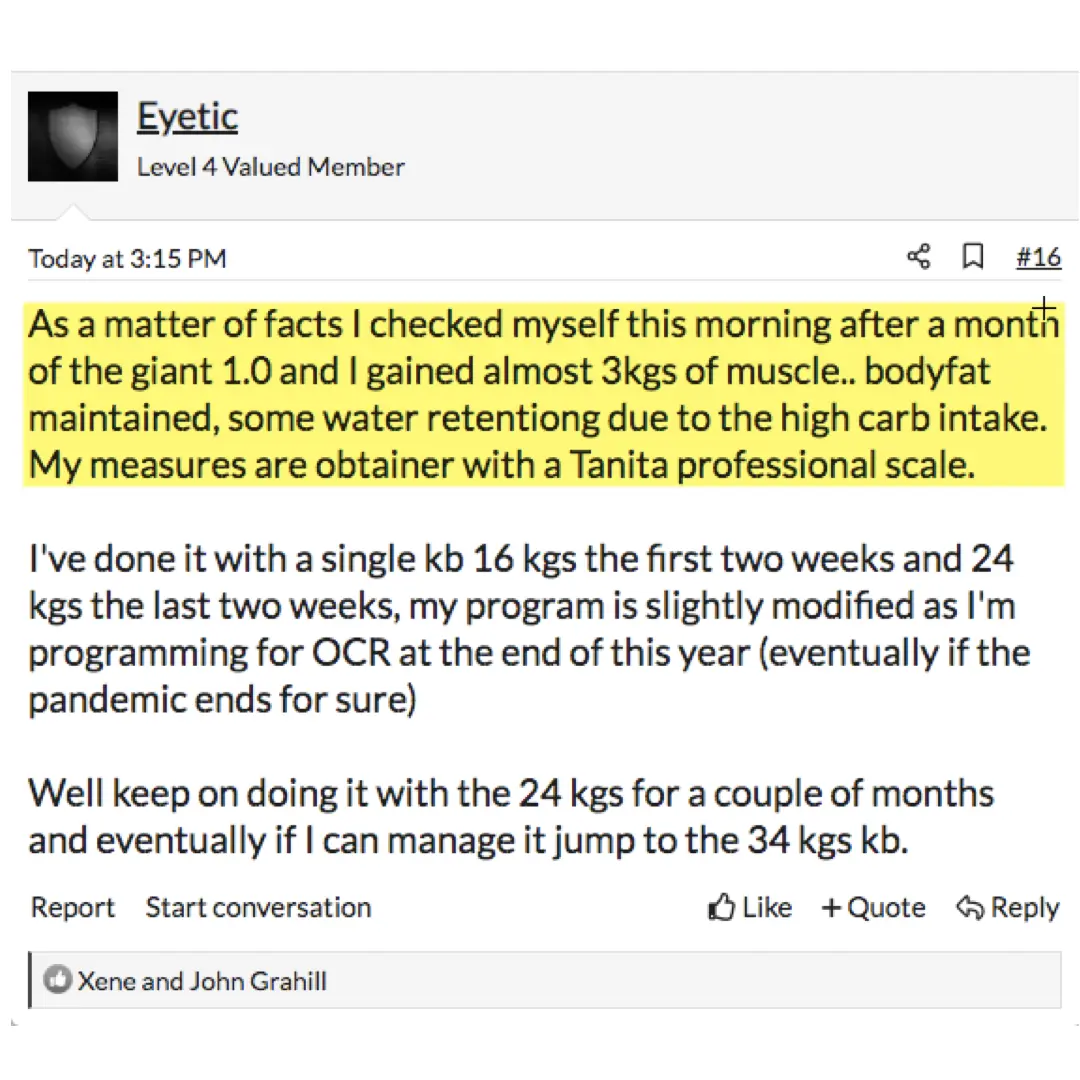 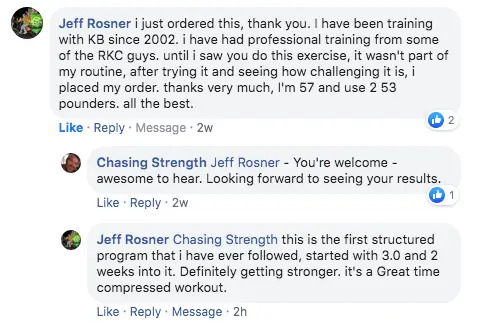 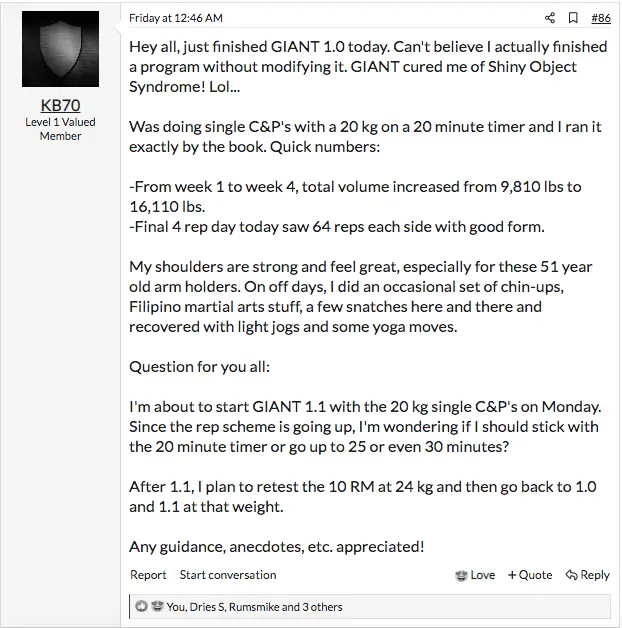 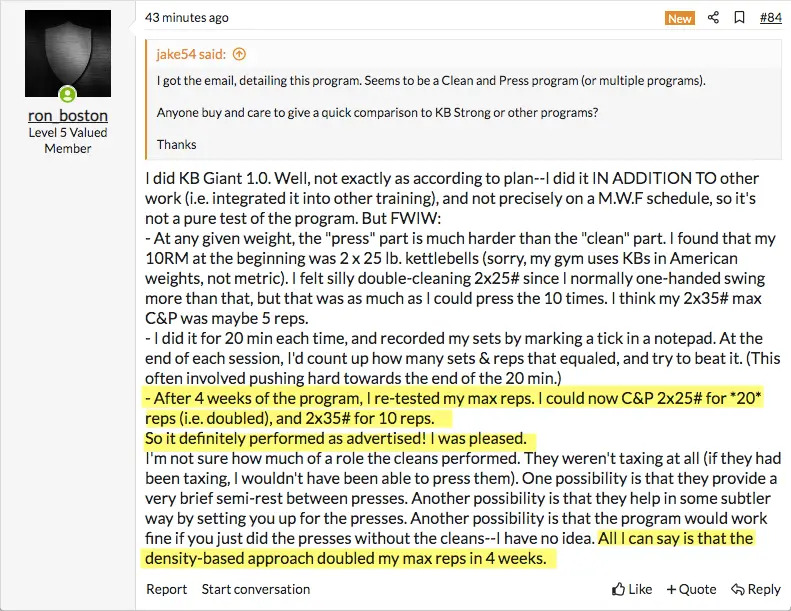 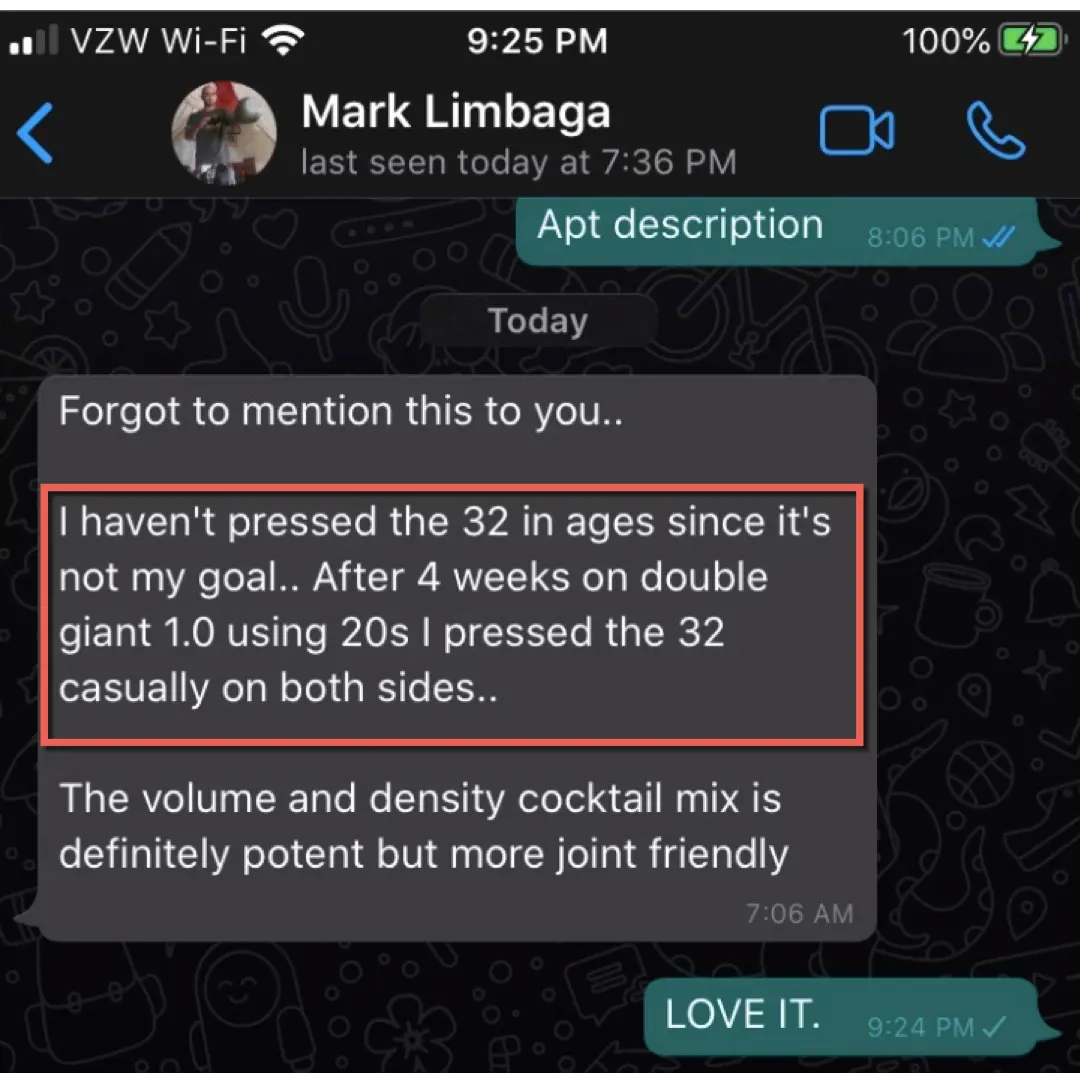 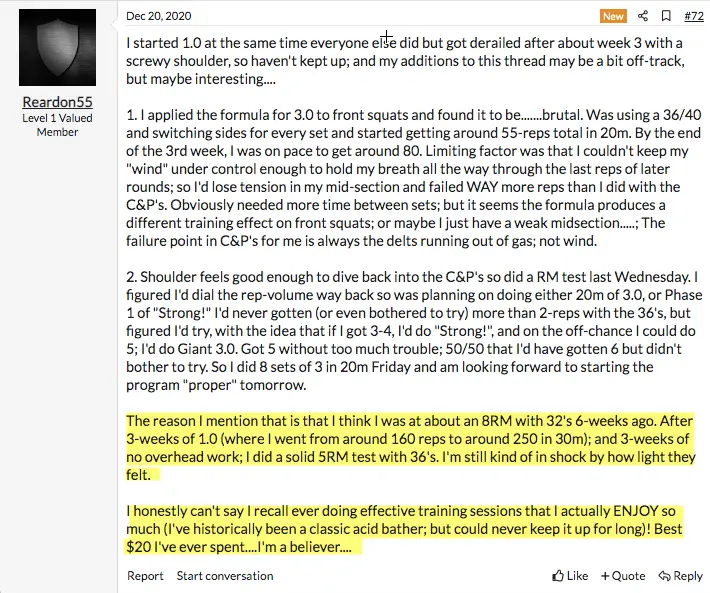 As you can see, THE GIANT delivers.

If you want to see measurable improvements in your strength, and a decrease in your body fat, without spending hours a week working out, then grab your copy today.

I'm so sure that you'll get "Extra Strength" on your Clean & Presses AND actually SEE a visible difference in your body in the next 30 days, like John Grahill did, that if for some strange reason you don't, I'll happily refund you your purchase price.

Simply send me an email showing me your training journal and we'll part friends. Deal?

Q: How long is each workout?

Q: How long is THE GIANT program?

A: There are FIVE programs and each is 4 weeks long - so 20 weeks - almost 5 months worth of programs.

Q: What size kettlebell do I need?

Q: What's better - using a single kettlebell for THE GIANT or a pair of kettlebells?

A: A Pair. They create greater systemic demand and therefore faster, more noticeable results (like John's).

Q: If I use a pair of kettlebells, do they have to be equal?

A: No, you can use mixed-matched kettlebells.

Q: Does this work for women as well as men?

A: Yes. The higher rep sets probably work better for women because women respond to strength training through a "growth hormone response" - which is based on higher training volumes and densities. So I fully expect a woman, based on my experience of training women for the last 25+ years, including my wife, to see results.

Q: Will THE GIANT work for people over 40?

A: Yes. John Grahill is over 50. It worked for him, it'll work for you. Incidentally, I'm in my late 40s, and these types of programs seem to work BETTER for me the older I get. They seem to work better for my recovery.

Q: How long do I have to try this out?

A: You can have a 30-Day Money Back Guarantee. I fully expect you to see similar gains to John Grahill, who is over 50. If for some strange reason you don't - email me at support@chasingstrength.com with a copy of your training log showing me your lack of progress, and I'll happily refund you and we'll part friends.

Thanks for reading this letter.

I hope you decide you're ready for the "Bone-In Tomahawk Ribeye of Training" and take me up on my offer and grab THE GIANT programs today. 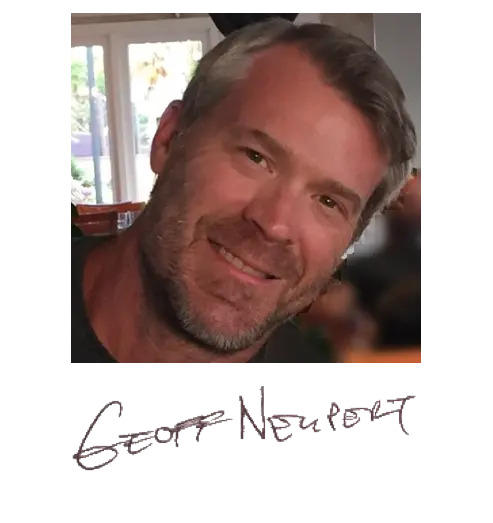 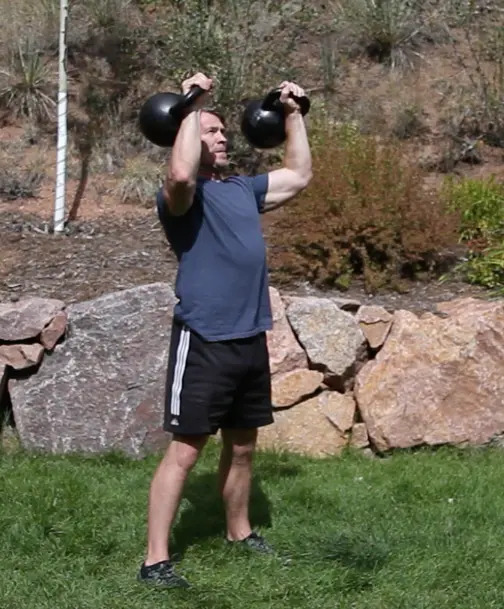 Geoff Neupert has been training people from all walks of life since 1993.

He’s been training his clients and himself with kettlebells since 2002 and has been called by some, a “Kettlebell OG.” He was a Master Instructor with two different kettlebell instructor certifications - the RKC (Russian Kettlebell  Challenge) and StrongFirst. He was also the StrongFirst Education Manager from 2013-2014.

He has travelled the world teaching others how to become kettlebell instructors and has taught his own intermediate and advanced Kettlbell Burn, Kettlebell Muscle, and Kettlebell STRONG! kettlebell workshops.

Geoff is the co-creator of Original Strength Systems, a movement restoration company called, which helps people restore and rebuild their ability to move like a kid again, and taught that system all over the world too.

Geoff is a former Division 1 Strength & Conditioning Coach at Rutgers University where he trained athletes from 26 different teams. He also is a former National Qualifier and State Champion in the sport of Olympic Weightlifting.

He’s married to a beautiful woman and has two kids.

DISCLAIMER: Due to recent statements from the United States Federal Trade Commission (FTC), I must disclose what “typical” results using these programs will be. The results expressed in this letter are the results of one man, the results of others who have used the program, and my results as a professional coach, who's trained people for 27 years. You should not expect you will experience the exact same results, as we are all different people. Different people have different results. Just good common sense. Back to the FTC: Typically, the average person will become really excited after reading this letter and will purchase this product thinking it’s some sort of magical pill. They will either never print out the programs and do them, or do one workout and think it’s “too har-d-d-d” (said in the best whiney voice ever) and abandon their attempts. So, the typical, average person will do nothing and “hope” for change. So their results will be zero. Your results, should you wish to “not be typical,” or "not be average," are completely dependent on your ability to actually do the work, as written in the programs - not your "interpretation" of the programs - and follow through. Again, this is not a magic bullet. Unicorns do not exist. And there is no pot of gold at the end of the rainbow.